I first learned about fingernails on a chalkboard in elementary school. I had a friend who was fond of dragging his across one at random intervals, just to drive us (his friends) crazy. Since then I have used the expression “like nails on a chalkboard” from time to time, in two specific ways: either semi-literally (i.e., to describe an intensely irritating sound), or purely figuratively (to describe someone who, or something that … well … drives me crazy). I have used the expression, for example, with reference to the badly-tuned piano at summer camp, the squeak of wet shoes on the polished concrete floor at work, the guy upstairs who does carpentry all day long with what sounds like a dental drill for a whale, Linkin Park, Jared Kushner, and—most recently—Ben Shapiro.

But I have never, to the best of my recollection, ever used it with reference to a woman. Not on principle, mind you. I could probably come up with some apt exemplars if given some time to think. I just don’t think I’ve ever had the occasion.

So I was immediately struck by the outraged reaction to Ontario Premier Doug Ford when he recently said to NDP leader Andrea Horvath, “It’s like nails on a chalkboard, listening to you,” as reported by the CBC:

“We need to address the misogynistic, sexist attitude of this Premier and his government,” NDP education critic Marit Stiles tweeted in part.

Ontario Liberal Leader Steven Del Duca also weighed in on Twitter, stating: “Misogynistic rhetoric like this has no place in the Ontario Legislature. For it to be hurled by a Premier is unthinkable,” he said, adding that Ford should apologize immediately.

Green Party Leader Mike Schreiner agreed, saying: “I thought the premier’s language was misogynistic and unacceptable and he should unequivocally apologize.”

Does this pass the misogyny test? Would you say this to a man as an insult? No? Then it's sexist, @fordnation. You owe Horwath and the women of Ontario an apology.

1. "Nails on a chalkboard" is absolutely misogynist and sexist.

Your *opinion* is worth NOTHING.

It would be nice if you could learn some f-ing decency.

As a communications expert, I can confirm: referring to a woman leader's criticism as like “nails on a chalkboard" is indeed misogynist. Totally offside and uncool. https://t.co/rc70NSKsH0

There are some interestingly different hermeneutical principles at work in these responses. @KellB_M says that if you would only ever say “It’s like nails on a chalkboard, listening to you” to a woman, then the expression is sexist and misogynist. That sounds plausible to me. I don’t know if Doug Ford has ever said (or would ever say) this to a man, but if not, then he was probably being sexist and misogynist to Andrea Horvath when he said it. However, I have said it to (or at least of) men, so on the @KellB_M principle, the term itself is not inherently sexist or misogynist.

@Mikegibbs appears to be working with two different hermeneutical principles. The first is encapsulated in the locution, “Dear other men, ‘Nails on a chalkboard’ is absolutely misogynist and sexist.” This would seem to imply that the expression itself is inherently—and thus always—misogynist and sexist. It would imply that I was being misogynist and sexist when I used it to describe Linkin Park. This is patently ridiculous. The origin of the expression is—wait for it—the grating sound of nails on a chalkboard, which is ungendered, both literally and etymologically. Contrast this with the word “hysterical.” One can describe a woman (or a man) as hysterical without any sexist intent at all, but if you know your history of the English language, you will know that the word was originally inherently misogynistic, coming as it did from the Latin for “of the womb.” One could argue that using the word perpetuates the sexist trope that only women are crazy. More on this in a minute.

@Mikegibbs’s second hermeneutical principle is more interesting: “When women say it is sexist and misogynist IT IS SEXIST AND MISOGYNIST.” (He then spices this up with the chaser, “Your *opinion* is worth NOTHING.”) This principle establishes a class of people as authoritative arbiters of meaning. It is not entirely clear how one determines in any particular case who the authoritative arbiters of meaning would be, but the idea strikes me as problematic, paying as it does not the slightest attention to intent, etymology, context, or anything else that we ordinarily use as interpretive aids. It also generates the paradox that if one woman says the expression is sexist and misogynist but another says it is not, then it is both sexist and misogynist and not sexist and not misogynist at the same time and in the same respect, violating Aristotle’s law of contradiction.

@ColleenDerkatch’s principle is an appeal to authority. “As a communications expert,” she confidently says, “I can confirm: referring to a woman leader’s criticism as like ‘nails on a chalkboard’ is indeed misogynist.” Perhaps there is scholarly literature on this topic backing up this claim to authoritative expertise. If so, I would very much like to see it. But my online queries of scholarly journal databases turned up nothing. 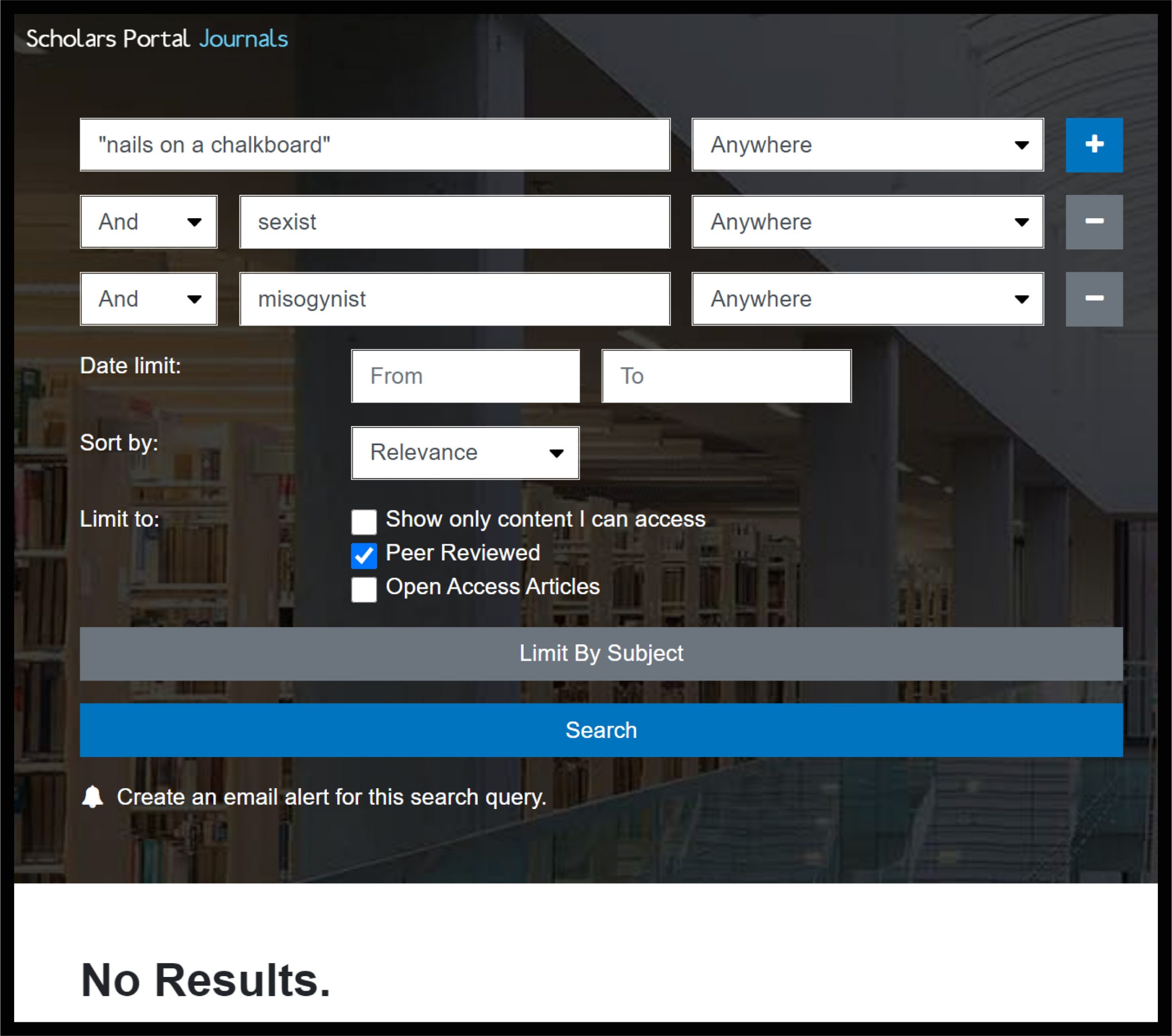 I am not trying to defend Doug Ford here. At the very least, he was rude. To quote @Mikegibbs, “It would be nice if you could learn some f-ing decency.” But I just don’t see that the expression itself signifies what Horvath’s supporters and Ford’s critics seem to think it does.

Here I am heartened by the social media responses of people who agree with me. So far I have not yet seen much sign of the anti-woke/PC pile-on that we saw in response to horrified reactions to the use of the word “niggardly,” which sounds terrible but actually isn’t. Mostly I have only seen respectful challenge, puzzlement, or, at most, exasperation.

Now, the day may come when “like nails on a chalkboard” is only ever used in a transparently sexist or misogynistic way (though I suspect it will die off before then, killed by whiteboards and PowerPoint). English is a living language, and if this is the fate of the expression, I will readily concede that it has come to have that meaning. I have long since abandoned my quixotic tendency to resist usage-driven changes in the meanings of words such as “decimate” and “literally,” though both literally still grate like nails on a chalkboard. For this reason I myself now freely use the word “hysterical.” Nobody knows where it came from, so nobody cares. The last time I heard someone object was in 1979, and that fellow was a professional pedant, not an actual human being.

As for Doug Ford, neither I nor anyone else–probably not even he himself–knows whether he uttered the words with sexist or misogynistic intent. So never mind. If you really want to know what he thinks of women, look at his policies.